From Colour Switch to Broken Age - we identify the top games with beautiful design, and what you need to look out for when creating your own.

Deciding how to visually represent your mobile game is arguably the most exciting stage in your app’s development. But it can also be one of the greatest challenges. Balancing breathtaking visuals or charming aesthetic features with practical and seamless navigation is something not all developers have been able to easily achieve.

Essentially, a good design style needs to draw users in to an engaging world through great aesthetics and unique visuals, while also supporting the overall user experience.

An amazing hand illustrated backdrop by a talented artist is all well and good. However, if it doesn’t match up with your game’s core functionality, it’s not worth the investment. Whether you’re developing hyper-casual or hard-core games, finding the right design involves an appreciation of your genre’s limitations, a practical understanding of user experiences and most of all, a flare for creativity.

Starting with the basic but beautiful titles, through to the more sophisticated art styles, here’s a look at some of the most awesome game designs and why they’ve been so effective in capturing gamer’s attentions.

Not necessarily the first game that comes to mind when you think of beautiful art style, but this is definitely a title that shouldn’t be overlooked. Known for its instant playability and appealing visuals, Voodoo’s Helix Jump is a great example of effectively implemented art style.

This is not a game that overcomplicates the core game loop. Instead, its vibrant design adds just the right amount of creative flare to keep players coming back for more. 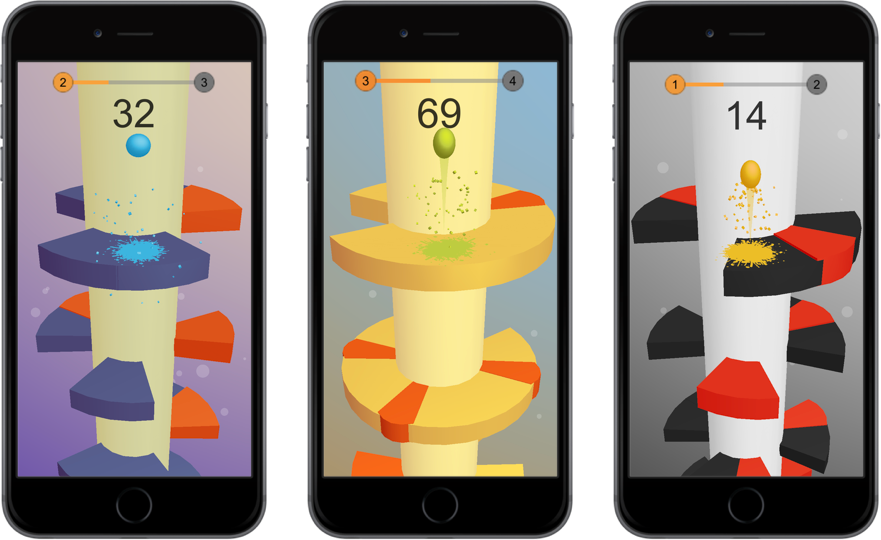 Use contrast to your benefit

Each level has a different colour pattern. While this is a basic design feature used by many games, its role here is more important. Having changing colour schemes is vital to keeping players from feeling bored or complacent due to repetitive levels.

As the ball repeatedly bounces, splashes and explodes into lower depths, we can thank the game’s vibrant design for delivering a sense of constant visual reward.

The use of contrast is equally important too, as it lets the audience know which areas they shouldn’t land on. Perhaps the best part of all is that no words are needed to explain this feature — the art style allowing for naturally intuitive gameplay.

You really feel a sense of gravity with this incredibly playable hyper-casual game. Developed on Buildbox, the clean and simple art style is one of its most important features with colour coordination incorporated into the very gameplay.

As you brace yourself for a shaking explosion when you touch the wrong colour, you’ll soon realise the importance of clear, contrasting graphics and colour tones. The dark background lets the distinctive shapes stand out, helping you keep track of your progress as you fall or propel your way through the game.

When not to use colours

To avoid confusion, the developer purposefully uses white stars to differentiate this element from other layers of the game. A simple tweak, but vital for the success of this hyper-casual title.

This is a great example of a developer allowing the style to take a step back while core game functionality takes centre stage, which is sometimes exactly what is needed in this segment of the mobile game market.

What does it take to create a great design for your mobile game? @GameAnalytics analyses some of the top game art styles and shows why they were so successful. Click To Tweet

This pixel art game is perfect for mobile gaming. Developed by Superbrothers, this game combines almost a poetic style with the weird and wonderful, making you want to delve deeper into the pixelated world.

Pixel-art can be quite complicated and almost overwhelming to look at for some. However, the developers behind Sword & Sworcery have done an excellent job in balancing art, design and detail. By purposely softening the background and adding a gentle gradient effect, players are allowed to focus on what’s important in the game, while also enjoying the intricate pixelated design of the scenery around them.

This is particularly important in this mobile game due to how small and delicate the design is of your character. Anymore pixilation on the screen would sacrifice concentration, and would only make it more difficult to see where your little guy is.

A puzzle game that pushes the boundaries of its genre in terms of design, Monument Valley is a truly spectacular masterpiece of the mobile games market. This game is so visually beautiful, it even has a well known store where people can buy prints and t-shirts of the various designs.

With consistently impressive visuals that draw the user in with modern adaptations of M.C. Escher’s geometric prints, and scenes inspired by captivating pieces of art and pop-culture, Monument Valley is a favourite of many avid gamers and casual game fans alike. And we believe much of this is to do with its impressive art style. The colour scheme alone offers immersive moods and tones that complement each new environment, while still delivering interesting and challenging puzzles that hold your attention – blurring the line between art and gaming.

Great use of shading and tones

As this game is rendered in 3D, tones and shading play a large role in adding depth to the landscapes. It would be an easy aspect to overlook, but attention to detail is one thing Monument Valley is great for.

There is so much to complement about this game’s design style, from the shimmering reflections of images in the water to distinctive characters. Getting stuck on a puzzle has never felt so pleasant.

Originally published on console, Valiant Hearts has been perfected for the mobile gaming platform. Its definitive art style stays true to the story, while adding a spin to the puzzle game genre.

Use design to help tell your story

As expected, Ubisoft Montpellier does well to tell a story through their art style. Early in the game, as you march your way across the battlefield, you’ll see comic strip style panels pop up, giving you a better idea of what’s happening beyond your small screen without interrupting gameplay.

To add even more stress and a sense of danger as your character sprints across the field, you’ll find yourself overwhelmed by overlaying explosions blocking the view of your surroundings. This is a brilliant example of design bringing a game to life and helping tell a story.

A side scrolling action adventure game with a slight twist. Badland integrates the weird and unusual into its style as a charming, but oddly creepy flying creature flaps his way through a mysterious, dark and magical semi-underworld.

You’ll be forgiven for drifting off into the visuals and imagining the world that exists beyond the game here.

The developer and publisher Frogmind have done well to take a simple and classic game type and make it deeply immersive.

With explosions, buzz saws, slicing machinery and crunching mechanics posing a danger to your character, it’s your job to squeeze your way through as far as you can. And what a pleasure this is to do with shimmering reflections and dreamlike exposure integrated brilliantly throughout.

A great example of subtle design

By adding a subtle glow to certain collectable items, Badland uses effective design to remedy one of the common frustrations gamers experience when playing a fast-paced game like this. Quickly finding key objects throughout this type of gameplay can be tricky, so the bright visibility in contrast to the dark shadows of the game makes identifying those vital items much easier to do.

If you were a fan of the critically acclaimed game Grim Fandango, then you’re probably already aware of Tim Schafer’s latest game, Broken Age. This point and click game published by Double Fine Productions focuses less on action, and more on peculiar puzzles, delicious design and delightful dialogue. Not much can be said for this design other than you can tell the lead artist put their heart and soul into this project. At no point is this game short of a masterpiece in terms of creativity.

Taking a step back from action, this title shows us great writing, characters, and a beautifully designed world which any gamer will quickly fall in love with.

Inspiration and imagination has lead to many of the most popular mobile games out there. Take a look at these top games who have nailed their art style. Click To Tweet

An inspiring idea or concept often lays the foundation for a hit mobile game. In the hyper-casual sector for instance, much relies on delivering instant satisfaction and appealing visuals to carry the player through the simple game mechanics of the platform.

Whether you’re building a game from scratch or are part way through your development, consider video clips that feature mesmerising scenes of destruction, slicing, correlation, tessellations or explosions when it comes to inspiring your design style. As Amanata Design’s puzzle-based adventure game Machinarium demonstrates, you might find the scrap heap the best source of creativity for your style. From nature, art, natural and manmade environments, ideas from game development websites, or even oddly satisfying videos, inspiration comes in all shapes and sizes.

You may have a clear idea about what your creative concept should look like on screen, but it will take someone with knowledge and experience to understand how your design will work with both your user interface and user experience. This is why it’s important to work with an experienced game designer when developing your art style.

The best game development process should involve collaboration with designers who can tell you whether your ideas can actually be implemented.

If there is too much discord between the design and UI/UX for instance – where style and functionality don’t get along – this will result in barriers to your gamer’s overall enjoyment levels, and ultimately less retention and revenue.

Reaper: Tale of a Pale Swordsman – developed by Hexage

Creating a style guide to structure your visual communication is a great way to ensure brand consistency. Having a standard guideline that safeguards unity and cohesiveness will go a long way in keeping your design in line with other elements of your platform.

There are many different styles and trends within each genre of mobile game. But what defines an effective art style is the balance between engaging aesthetic features and practical usability – matching the appearance of the game with the overall experience players have when using it.

This is often the result of collaboration between different parts of the game development process, from game design and artwork to core engineering and product management.

Obviously, a small team of indie developers might struggle with capacity. But, understanding the fundamental impact of design on your title is a great place to start. How To Perfect Your Game’s Core Loop

At the heart of your game’s design, there are core mechanics, and the core gameplay loop. In short, it’s the main activities that structure the entire design and the players…