When making hyper-casual games with great next day retention, how can you make sure you get the most out of your players?

Editors Note: In June 2019, we held an event dedicated to making hit hyper-casual games. Alongside GameAnalytics, we were joined by publishing giants, Voodoo, and Kawaii specialists, Platonic Games, to share the latest stats, trends, and insights when making hit hyper-casual games. You can find all of the info, decks, and videos from the event here.

As a relatively new genre, we’re rapidly witnessing changing trends with hyper-casual games, as well as seeing regular new titles fighting for top positions on the app store. With this in mind, relying on tired marketing strategies or an ill-informed idea that free-to-play titles don’t need a marketing budget won’t do you any favours.

When monetizing your hyper-casual game, you’ll want to focus on getting as many people playing as quickly as possible, but also make sure they come back. Usually, if a hyper-casual game has less than 40% day 1 retention, big publishers will cut their losses and say “Next!”.

So, when you make that amazing hyper-casual game with great next day retention, how can you make sure you get the most out of your players?

Unlike mid and hard-core game titles that rely on in-app purchases and user loyalty to monetize their players, hyper-casual games gain returns through in-app advertisements and high volumes of downloads.

This means developers are not forced to alter the actual structure of their games with various opportunities. Although they still can include IAP in their game (for example, extra lives, additional coins, skins etc), they don’t necessarily need to monetize their user activity through purchases.

Hyper-casual game developers can instead focus on accessible, simple and lightweight platforms that attract large numbers of casual gamers. Whether those gamers have five minutes or two hours to spare.

The big picture isn’t to secure loyal players with high Lifetime Value (LTV). To be successful with your hyper-casual title, you’ll need to tailor your marketing and ad optimization strategy to it’s typically low retention rates and engagement loops.

Essentially, you need to attract high volumes of players to download your game to give you the best chance of monetizing your platform through in-app advertisements.

As hyper-casual games require large numbers of new users to generate revenue, finding ways to increase traffic by any means possible is essential.

‘But why would I promote someone else’s game in mine? That’s ridiculous’

And you’d think you would be right to have this mindset. However, cross-promotion plays a huge role in sustaining the genre’s ecosystem, as titles share gamer traffic in an equally beneficial trade. The beauty of an effective cross-promotion campaign is it allows you to tap into existing pockets of players.

The hyper-casual genre is unique from other formats. It doesn’t encourage gamers to loyally prioritise certain titles over others, as is the case with mid-core and hard-core games.

While there is still competition amongst publishers and developers for market share, it is common for users to play several different titles at the same time – depending on their mood. Therefore, the impact of redirecting users away from your game won’t damage your title’s traffic (or that of your cross-promotional partner).

Accessing a cross-promotion community can allow you to expand beyond your user-base, and trade gamers with other platforms to create a positive promotion cycle. The trick is to find communities that share similar audience segments to yours and start a relationship.

One of the simplest and most popular methods of cross-promotion is interstitial ads or app trailers. A short and engaging snippet featured during an intermittent stage in a gamer’s user journey is an effective way to bring exposure to your hyper-casual title.

You could also be creative and offer in-app rewards to users who download your title. From gold coins to virtual goods, entice gamers to migrate to your platform with added perks.

One of the most important aspects of marketing your mobile game is, of course, choosing the right distribution networks and advertising tools to maximise your game’s exposure.

Some of the most popular advertising platforms at the moment are AdMob, Tapjoy and Mintegral – whether you’re focusing on one or several of these, it’s worth doing your research to find the most suitable tool for your title.

In order to get the most out of your hyper-casual game, you’re going to need to promote your title across the best mobile app channels and digital pathways. Consider who you are targeting and choose partners who will help you reach this demographic.

How will these providers help me?

These providers will essentially let you buy new users by pushing out advertisements across many different traffic sources. Having a tangible cost per install (CPI) for new users will also allow you to more accurately measure the performance of your marketing efforts.

Different ad formats can also be employed to maximize your exposure. Consider how your game works as a banner, rewarded video or interactive ad. Evaluate the CPI for all these formats to figure out what is giving you the best return for your investment.

However if you’re delivering creative and engaging ads but end up annoying your audience due to its length or volume, your new user traffic will suffer.

To make the best impression, you should tailor specific ad formats. For instance, interstitial ads should be optimised to fill the whole screen with high quality graphics, while video ads should be the perfect length (between 15-30 seconds) without lag or loading delay.

When it comes to hosting ads on your own platform, the challenge here is to increase revenue without compromising user experience. Find ways to enhance the user journey rather than distract gamers away from the wonders of your title.

A few different approaches (without frustrating your audience) include:

Ultimately, you need to put yourself in the gamer’s shoes. When playing a casual game – whether you’re on the way to work or sitting on your sofa – the last thing you want is to be annoyed by a boring or irrelevant advertisement.

If you really want to think outside the box, consider enticing users with rewarded daily sessions to keep them engaged. Research from GameRefinery shows that rewarding multiple daily sessions has grown in prevalence within the top 100 grossing games from 25% to 34%, year-over-year. This clever tactic gives users the chance to be rewarded for their regular gameplay, while increasing ad monetization capacity and banner views. It essentially brings a touch of loyalty to a genre that typically has low retention and high turnover.

When creating ads for your #mobilegame, the last thing you want to do is frustrate your players to the point that they leave 😶 #indiedev #gamedev Click To Tweet

From optimising your app store profile and description, to digitally promoting your title across many different channels, most developers understand the role that online and offline promotion plays. However, even the simplest of ideas are easy to overlook.

You may have heard this over and over again, but don’t underestimate the power of social media when launching your game. The simplest and easiest method is informing your existing followers about your upcoming title through your own, or your publisher’s, various social accounts. 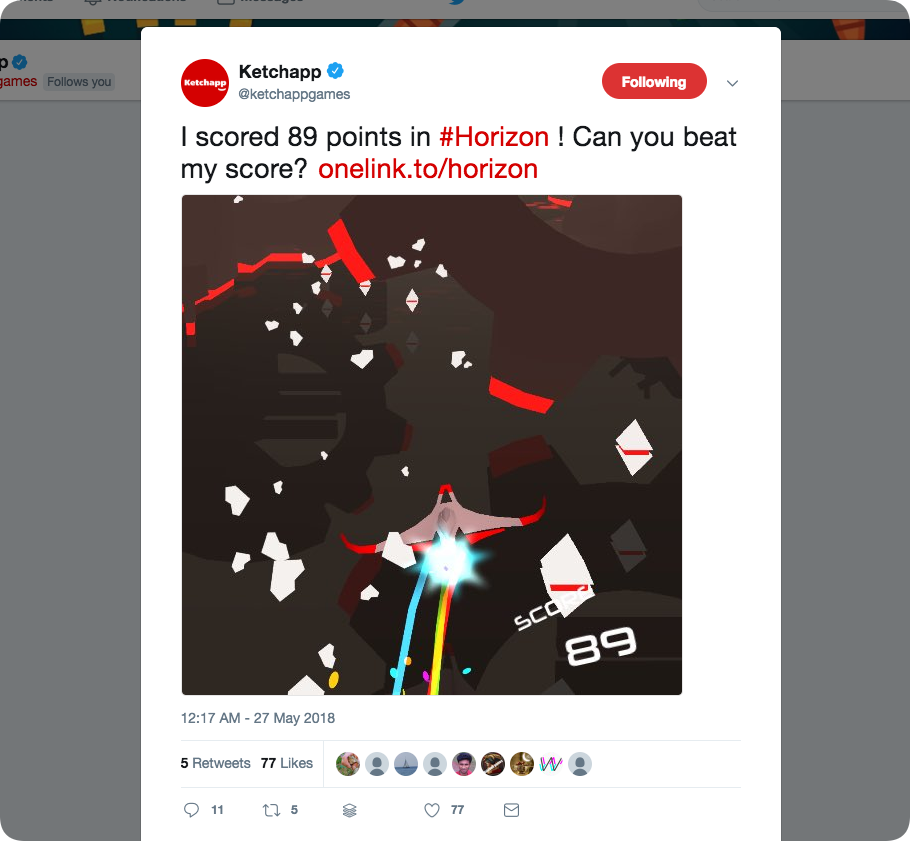 But don’t stop here, you’ll want to create a presence that goes beyond your own borders. Find ways to access different pockets of gaming communities by offering them enticing content. Share leaderboards and challenge your audience to beat it, offer prizes to the top players and promote daily challenges. Stay engaged with your audience.

Get to know your players face to face

While a killer online presence is still the gold standard for mobile games – with impressions, reach, clicks, engagement and social sharing all worthy measures of success – an offline presence is also highly effective in exposing your title to new audiences.

There is still a place for classic face-to-face networking in the world of hyper-casual games. Whether we’re talking about attending specific networking events or conventions, being on hand to shout about your game is still an effective way of promoting your title.

However, attending the event is only half the work. It’s no use standing around and hoping people will fall in love with your game. Find creative ways to get noticed and interact with the people that matter. You could run a competition at the event for instance, with a leadership board visual to all attendees, challenging them to beat it. Another approach is to simply other freebies. RubyRei, the Spanish learning app, gave away a free t-shirt to everyone that followed and shared them.

In order to know whether or not you should cut your losses, you’re going to need to take a hard look at some analytics. There a few ways you can measure success and optimise your game. This includes:

From daily active users (DAU) and engagement scores, to drop off rates and CPIs, find a way to organize your metrics so that you have a clear insight into the progress of your game and its ability to acquire new players and generate revenue.

The future of hyper-casual gaming

Over the past year, hyper-casual games have seen unprecedented growth. We’ve learnt that success in the world of mobile gaming doesn’t require you to find effective ways to monetize users through in-app purchases, as mid-core and hard-core titles have done for many years.

We know that high volumes of users, combined with great in-app advertisements, provide a highly successful business model for any game developer. However, developers and studios alike will only reap the benefits if they create highly addictive, easy to play, fun games.

We haven’t seen what maturity in the hyper-casual market will look like yet. But, we’re likely to see further competition between developers and publishers to acquire, engage and monetize more users, with a range of new tactics and strategies up the sleeve of every developer searching for success in the market.

With innovation built in to the very core of these titles, new features and strategies will naturally occur over time that may change the genre’s characteristics. But can hyper-causal games, with their simple mechanics and minimalistic UIs, be anything other than what they are now?

We’ll be watching this space very closely to find out.

Enjoyed this read? Then you may like these ones, all focused on hyper-casual games: